First Mass at Notre Dame since the Fire: the Solidarity of the Christians of the Middle East 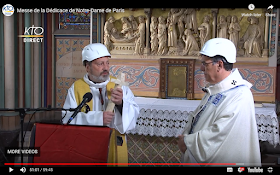 Tonight at 6 o'clock in Paris, Mass was celebrated at Notre Dame on the feast of its Dedication, for the first time since fire devastated the roof and part of its vault was destroyed on the 15th April 2019. At the end of Mass, Monseigneur Pascal Gollnisch (left), director-general of Oeuvre d'Orient (a Catholic relief agency for Eastern Christians) presented the Archbishop of Paris, Monseigneur Michel Aupetit,  with a Cross carved from the stone of the Maronite Catholic cathedral of St Elias in Aleppo in Syria, which had itself been badly damaged in the civil and religious strife between 2011 and 2016. The Cross will be installed in Notre Dame when it is restored. Thus there will always be a spiritual bond between the Church in France, and the Christians of all Churches who had been persecuted and had their homes and churches attacked and destroyed in hatred of the Faith in the Middle East. The Archbishop observed that, on the feast of Notre Dame's dedication, how appropriate it was that they were recalling the Stone once rejected Who became the chief Cornerstone.
Mark Woodruff at 19:49