Letter of Francis to Bartholomew: on bones of the Apostle Peter 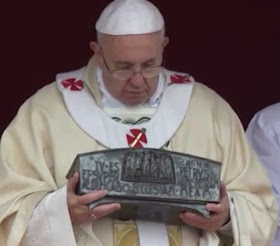 To His Holiness Bartholomew
Archbishop of Constantinople
Ecumenical Patriarch

With deep affection and spiritual closeness, I send you my cordial good wishes of grace and peace in the love of the Risen Lord. In these past weeks, I have often thought of writing to you to explain more fully the gift of some fragments of the relics of the Apostle Peter that I presented to Your Holiness through the distinguished delegation from the Ecumenical Patriarchate led by Archbishop Job of Telmessos which took part in the patronal feast of the Church of Rome.
Your Holiness knows well that the uninterrupted tradition of the Roman Church has always testified that the Apostle Peter, after his martyrdom in the Circus of Nero, was buried in the adjoining necropolis of the Vatican Hill. His tomb quickly became a place of pilgrimage for the faithful from every part of the Christian world. Later, the Emperor Constantine erected the Vatican Basilica dedicated to Saint Peter over the site of the tomb of the Apostle.

In June 1939, immediately following his election, my predecessor Pope Pius XII decided to undertake excavations beneath the Vatican Basilica. The works led first to the discovery of the exact burial place of the Apostle and later, in 1952, to the discovery, under the high altar of the Basilica, of a funerary niche attached to a red wall dated to the year 150 and covered with precious graffiti, including one of fundamental importance which reads, in Greek, Πετρος ευι. This contained bones that can quite reasonably be considered those of the Apostle Peter. From those relics, now enshrined in the necropolis under Saint Peter's Basilica, Pope Saint Paul VI had nine fragments removed for the private chapel of the papal apartment in the Apostolic Palace.
The nine fragments were placed in a bronze case bearing the inscription, Ex ossibus quae in Archibasilicae Vaticanae hypogeo inventa Beati Petri apostoli esse putantur: “Bones found in the earth beneath the Vatican Basilica considered to be those of Blessed Peter the Apostle”. It was this same case, containing nine fragments of the bones of the Apostle, that I desired to present to Your Holiness and to the beloved Church of Constantinople over which you preside with such devotion.

As I reflected on our mutual determination to advance together towards full communion, and thanked God for the progress already made since our venerable predecessors met in Jerusalem over fifty years ago, I thought of the gift that Patriarch Athenagoras gave to Pope Paul VI: an icon depicting the brothers Peter and Andrew embracing, united in faith and in love of their common Lord . This icon that, at the behest of Pope Paul VI, is displayed today in the Pontifical Council for Promoting Christian Unity, has become for us a prophetic sign of the restoration of that visible communion between our Churches to which we aspire and for which we fervently pray and work. Hence, in the peace born of prayer, I sensed that it would be highly significant were some fragments of the relics of the Apostle Peter to be placed beside the relics of the Apostle Andrew , who is venerated as the heavenly patron of the Church of Constantinople.
I sensed that this thought came to me from the Holy Spirit, who in so many ways prompts Christians to regain that full communion for which our Lord Jesus Christ prayed on the eve of his glorious Passion (cf. Jn 17:21).

This gesture is intended to be a confirmation of the journey that our Churches have made in drawing closer to one another: a journey at times demanding and difficult, yet one accompanied by evident signs of God’s grace. Pursuing this journey calls above all for spiritual conversion and renewed fidelity to the Lord who requires on our part greater commitment and new, courageous steps. Difficulties and disagreements, now and in the future, must not distract us from our duty and responsibility as Christians, and particularly as Pastors of the Church, before God and history.
The joining of the relics of the two brother Apostles can also serve as a constant reminder and encouragement that, on this continuing journey, our divergences will no longer stand in the way of our common witness and our evangelizing mission in the service of a human family that today is tempted to build a purely secular future, a future without God.

Your Holiness, beloved Brother, I have found great comfort in sharing these thoughts with you. In the hope of soon encountering you once more, I ask you to pray for me and to bless me, and I exchange with Your Holiness a fraternal embrace of peace.